I’m sitting in my blind under the old growth fir tree on the steep bluff, peeking down at the ocean below and the low tide rocks. A Mama seal climbs out of the sea and rolls over to nurse her pup. I call the little one Spunky. He makes a half-hearted attempt to climb out but turns around and swims away, saying “Catch me if you can”. Mama enters the game and chases him. Again she climbs out ready to nurse. Spunky does the same trick, wanting only to play.

Finally he is tired and hungry and he begins to nurse. The tide is rising. Mama dozes. After 45 minutes Spunky falls asleep. His little flippers are extended out and he barely moves. Now the flood tide washes him away – far away from Mama – and still he sleeps.

When Mama awakes, she dashes into the sea and quickly finds him. He rides on her back to the nursing rock, and plays in bull kelp, draping it all over his sweet face as Mama watches from close by. There is no question whatsoever that Mama and Baby seals adore each other. 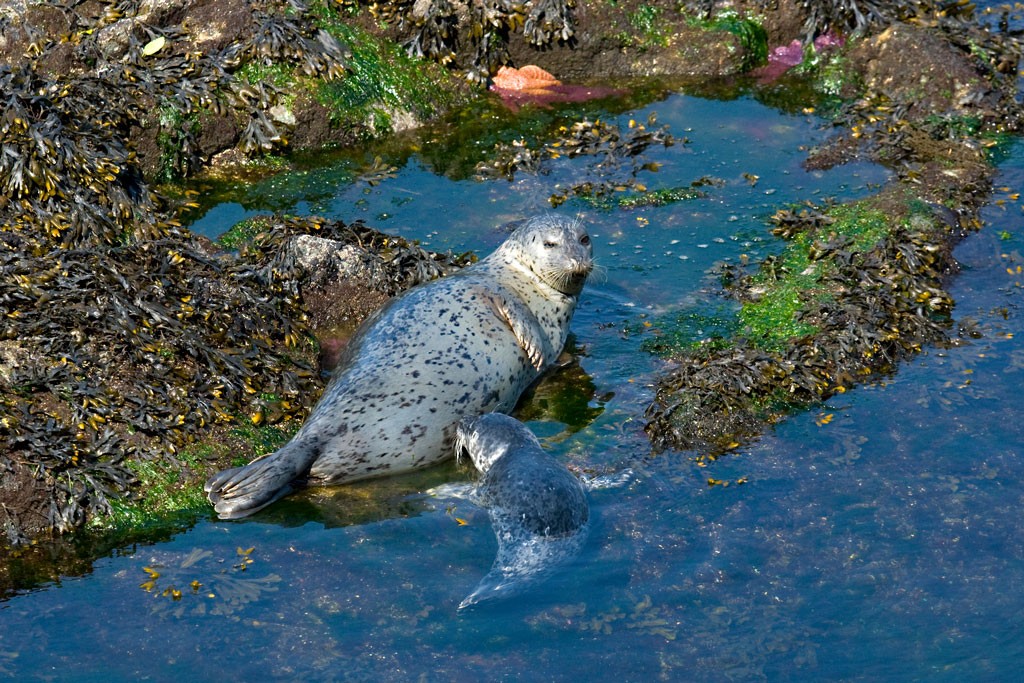 This morning I woke to a brilliant sky turning gold and pink, with electrifying colours. The air was fully charged. Slowly a full rainbow appeared over Vancouver Island, and then a double one came – faintly. My neighbours down the Narrows at Hope Point saw the morning sky and they were awed by it, too. 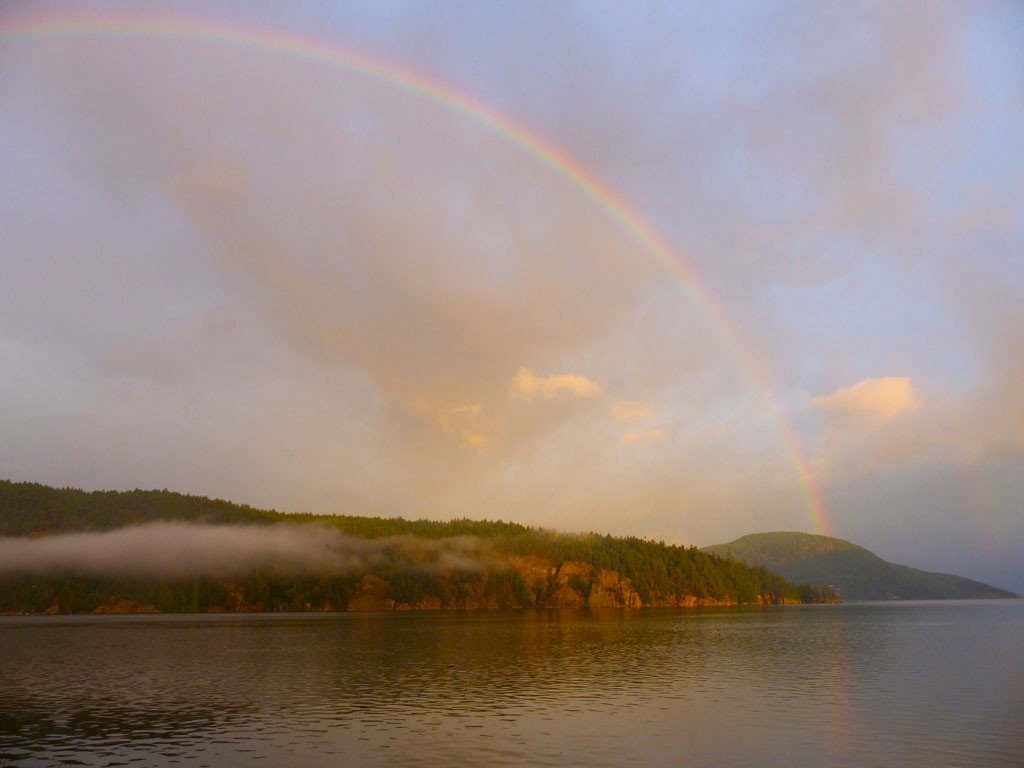 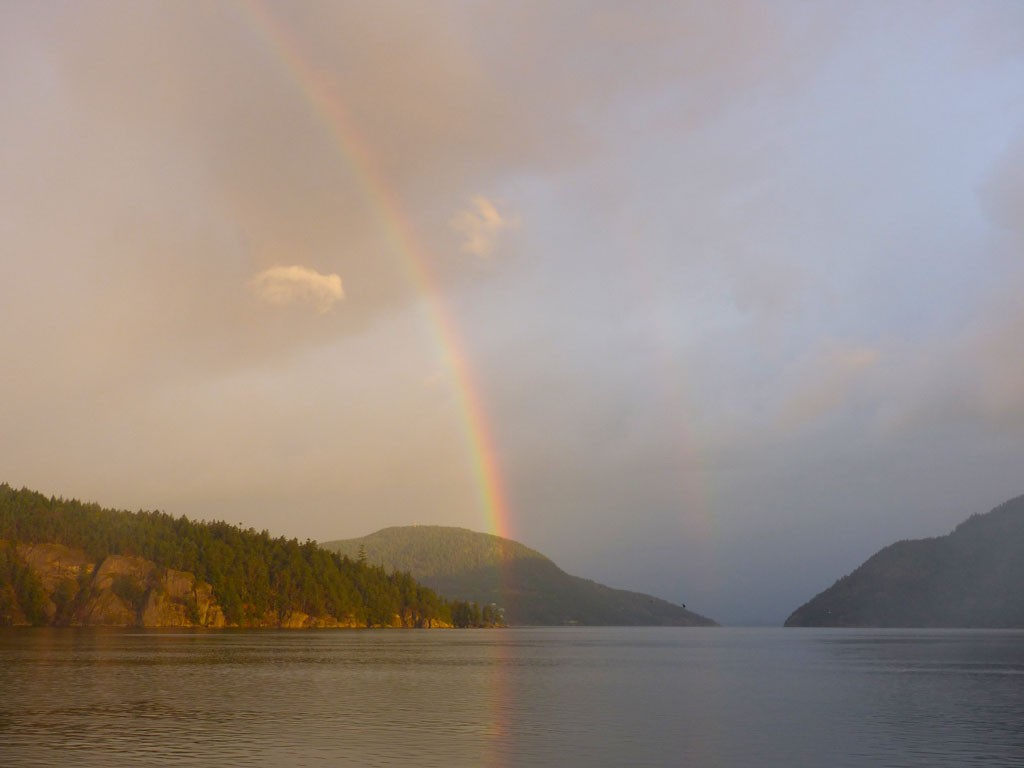 This morning I was in the blind on Bold Bluff Point for four hours. It is heaven here. I sit under a giant old growth Douglas fir tree on a rocky ledge that forms a perfect seat, and I am hidden from the boats that ply Sansum Narrows and also from the animals .. well, almost! I sit under a sloping branch, draped in an olive green net that wraps around my giant camera lens and tripod. I can barely see out of it.

This morning I changed the location of my camera and tripod, moving it farther out so I was more visible to the creatures that visit the rocks at Bold Bluff Point. A baby raccoon walked by on the low tide rocks, looking wet and scraggly and so cute with its masked face. I had just a few seconds of opportunity to get the photo. The coon heard my camera click and saw me staring at it through the giant lens, and scampered off.

Well, that was satisfying. It was my first sight ever of a raccoon on the beach at Bold Bluff Point. How many times have they slipped by me when I have been tucked away in the blind?

And why are we drawn to raccoons? They are warm-blooded mammals like us, and they are adorable to our eyes even though they raid our gardens. Perhaps they will be the next marine mammals, as they spend so much time in the intertidal zone, turning rocks over and eating tiny crabs. 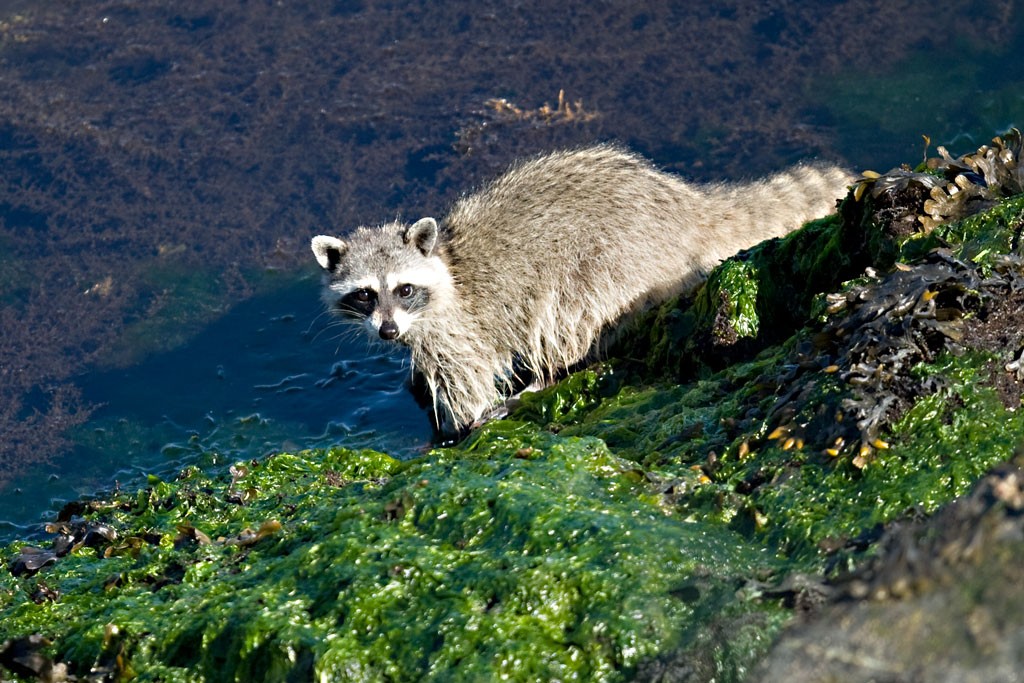 Peek-a-Boo! Who was faster?

I’m back in Sansum Narrows as a guest of Joan and Aubrey Cobham. They invited me to spend two nights in their off-the-grid cabin on Vancouver Island that looks across the Narrows to Bold Bluff and majestic Mt. Maxwell with its perpendicular stone cliffs rising high above the blue sea bay. From the Cobham’s cabin I see the old growth fir tree under which I sat for many hours and weeks, photographing the abundant wildlife that gathered on the rocks at low tide.

Aubrey met me in the heat of the day at the Burgoyne Bay Wharf, and we loaded up his Silverstreak boat with my camera gear, food and extra clothing plus my Toy Poodle, Zuri. It was heaven returning to the Narrows where I had spent 20 years without a road, and I was once again filled with awe at how undeveloped this area is, and how abundantly green and it is only 20 minutes from the heart of our island village where you feel the bustle of village life.

After a yummy chicken and garden salad supper, we began guessing where Mistress Moon would rise, and when. We knew she rose about 8:30 pm on the horizon, but we were flanked by mountains, and thought she might show her face around 10 pm.
I set up my tripod and camera on their open deck, and waited for the glimmer of light to shroud the shaggy black night fir trees on top of Mt. Sullivan, announcing her presence.

I waited, and waited. Joan and Aubrey went to bed. I waited and dozed off, opening my eyes every once in awhile to peek to see if she were coming. Nope. Then I dozed off again. About 15 minutes to midnight, I opened my eyes to see the fairy dust glimmer of light sifting over the ragged fir trees.

I stood on guard at the tripod and when she rose snapped pictures. She was brilliant. It is a challenge to get the trees in focus and the moon’s craters, too.

This July is a Blue Moon month, when two full moons will appear. I’ll be back in the Narrows for another photo shoot. 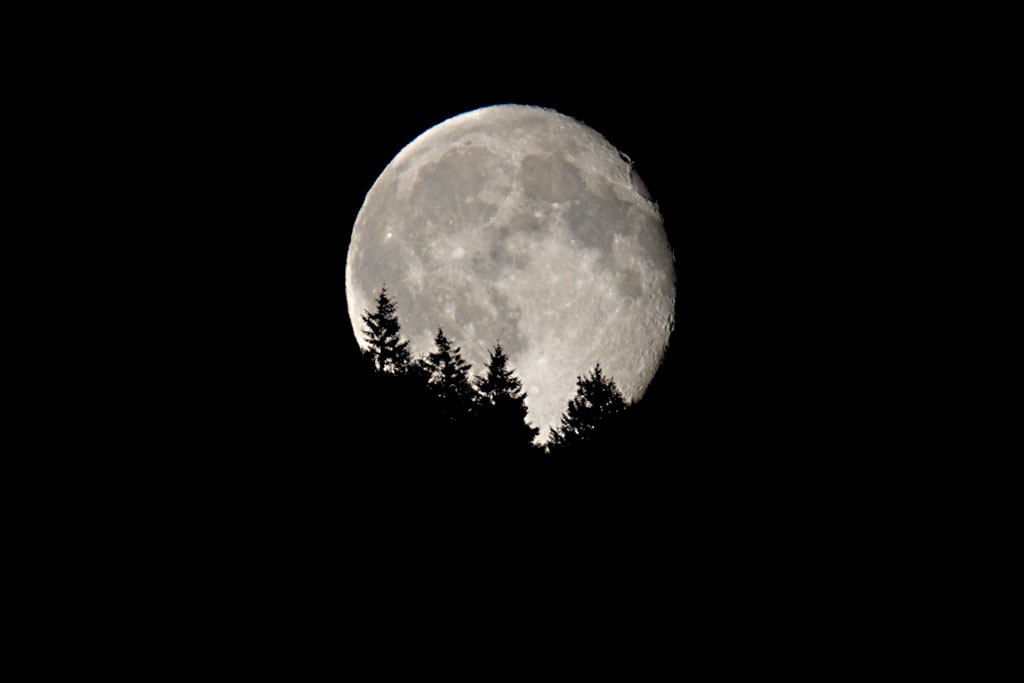